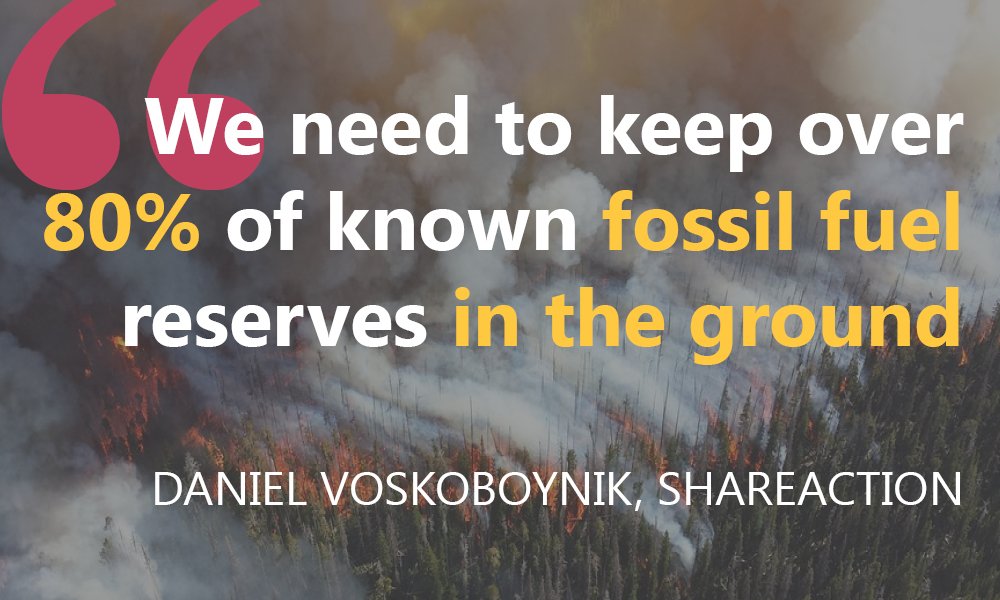 We live in a time of acute climate crisis. 2016 was the hottest year human beings have ever experienced. From the Philippines to Bolivia to Somalia, ecosystems and communities the world over are facing the devastating consequences of a warming planet. In 2017, floods have already pummelled communities in the Democratic Republic of Congo and Thailand. Gargantuan fires have caused one of the worst disasters in Chilean history, swallowing entire villages. Millions across Southern Africa are at risk of hunger and malnutrition, following record-breaking droughts. 2017 needs to be a year of decisive action.

If we want to keep the rise of global temperatures well below 2°C — as agreed by international governments at COP21 in Paris — we need to keep over 80% of known fossil fuel reserves in the ground. We have only a few years before keeping temperatures below 1.5°C becomes impossible. The window is also rapidly closing for 2°C. This will require an enormous transformation of the global economy, but also presents a great opportunity for building a sustainable low carbon economy – one that provides sustainable energy, confronts poverty, and delivers well-being to all communities.

Where do the oil giants fit into our sustainable future?

At ShareAction, we’re stepping up our game to harness the power of our savings to decarbonise the economy. Our pensions are invested in a wide range of companies—companies that can operate in a low carbon way, or drive temperature rises which threaten the lives and livelihoods of billions. The people who look after our savings are shareholders in these companies, and have the power to shape their behaviour.

We have only a few years before keeping temperatures below 1.5°C becomes impossible. The window is also rapidly closing for 2°C. This will require an enormous transformation of the global economy, but also presents a great opportunity for building a sustainable, low carbon economy

When it comes to the oil and gas giants, ShareAction is especially focussed on BP and Shell. They’re two of the largest companies in the world, and amongst the most influential oil majors. We want to make sure that they are held accountable—especially when it comes to how they invest in the exploration of new fossil fuel reserves.  Last year, we teamed up with The Wilderness Society to challenge BP’s plans to drill in the pristine marine waters of the Great Australian Bight. Local communities and organisations brought together thousands of supporters in Australia and around the world to voice their opposition. In October, BP announced it would not proceed with its plans in the region. This was a huge win for the local communities and wildlife, which would have been devastated by a potential oil spill.

The Bight is just one example of a project that oil giants shouldn’t be pouring money into if they were serious about tackling climate change. In 2016, ShareAction engaged Shell and BP’s shareholders on why these types of projects are such a bad idea. Investments in massive oil and gas projects threaten the stability of the climate and investments. In no way do these projects facilitate the just transition to a low carbon economy. Instead, they underwrite futures of displacement, flooding, rising sea levels, eroded coastlines, drought, and wildfires.

Institutional investors like our pension funds are major shareholders in these companies, and they can play an important role in stopping plans inconsistent with the vision of a low-carbon world. At a company’s Annual General Meeting (AGM), shareholders get the chance to speak up about key issues and vote on company policy.

Our principal focus at ShareAction is to change the strategy of the world’s largest oil and gas majors like BP & Shell, holding them accountable to ensure their business model does not jeopardise a safe and just future. At this year’s AGMs, we’ll be encouraging investors to vote down policies and procedures that do not align with a <2°C transition. We have to be clearer than ever, telling the oil majors: it’s time to move, or be left behind.

One of our main focuses will be the companies’ remuneration policies: these determine how much executives get paid, and what their incentives are. Currently executives are incentivised to implement “business as usual”, but we want to make sure they’re encouraged to make decisions that would drive the company towards the path of a <2°C transition.

This means that investors – including your pension fund – have a chance at this year’s Shell and BP AGMs to steer the companies away from threatening our future.

Is it only about fossil fuel companies?

Fossil fuel companies aren’t the only ones that investors should be challenging. Powerful banks like HSBC, Barclays and Royal Bank of Scotland provide loans and services to high-carbon projects. They are also the potential financers of products and services that can underpin a prosperous green economy. If we’re going to transition to a lowcarbon economy, we need to challenge the money behind high-carbon projects.

ShareAction will be turning up the heat this year, holding banks to account on their contribution to a dangerous climate, and encouraging investors to push banks to embrace their role in the low-carbon transition.

How can I help?

There are lots of ways you can get involved in our work. If you have a pension, you can join one of our Pension Power teams and meet the people managing your money. This way you can ask them directly about what they’re doing to hold companies to account on a just transition.

You can also become an AGM activist and put company bosses on the spot with tough questions at their annual meetings. And of course, you can stay tuned about our campaigns through social media and by signing up for email updates – and we’ll keep you in the loop with actions throughout the year.